Lately I’ve been getting into digital forensics investigation and in order to train myself I’ve been looking for some challenges. I found this awesome website which has a great compilation of challenges, research results and CTFs.

I skimmed over the different options and decided to challenge myself with The Rhino Hunt, developed by NIST.

This image was contributed by Dr. Golden G. Richard III, and was originally used in the DFRWS 2005 RODEO CHALLENGE.

The city of New Orleans passed a law in 2004 making possession of nine or more unique rhinoceros images a serious crime. The network administrator at the University of New Orleans recently alerted police when his instance of RHINOVORE flagged illegal rhino traffic. Evidence in the case includes a computer and USB key seized from one of the University’s labs. Unfortunately, the computer had no hard drive. The USB key was imaged and a copy of the dd image is on the CD-ROM you’ve been given.

In addition to the USB key drive image, three network traces are also available—these were provided by the network administrator and involve the machine with the missing hard drive. The suspect is the primary user of this machine, who has been pursuing his Ph.D. at the University since 1972.

For the purpose of solving this challenge, I have to do the following task:

Recover at least nine rhino pictures from the available evidence and include them in a brief report. In your report, provide answers to as many of the following questions as possible:

First I check the integrity of the image file that I have been given. The MD5 checksum of said file can be found in the challenge’s formulation.

We acknowledge that the checksum of our file is the same:

Now we know we are dealing with an untampered image file. Let’s gather some more information of the file:

Before I perform any file recovery or string search on the image, I open it with a hex editor. I wanna take a look at it. The root directory of the FAT filesystem begins on sector 497, at 512 bytes per sector, this means that the offset is 254464. I find that the USB key had only two allocated files. gumbo1.txt and gumbo2.txt

A huge portion of the file is filled with the same bytes over and over. It’s like part of the disk has been manually overwritten with the message “SORRY” and “CHARLIE” (Coincidence? :P)

Ok, time to recover some data, I will be using PhotoRec, and see what I can retrieve from this weirdo.

After going through the whole image file, PhotoRec has retrieved 134 files:

So… have I found the 9 rhino images yet? Sadly, no. There are 4 rhino images, and 5 alligator images. I proceed to document the images found by computing the MD5 checksum. 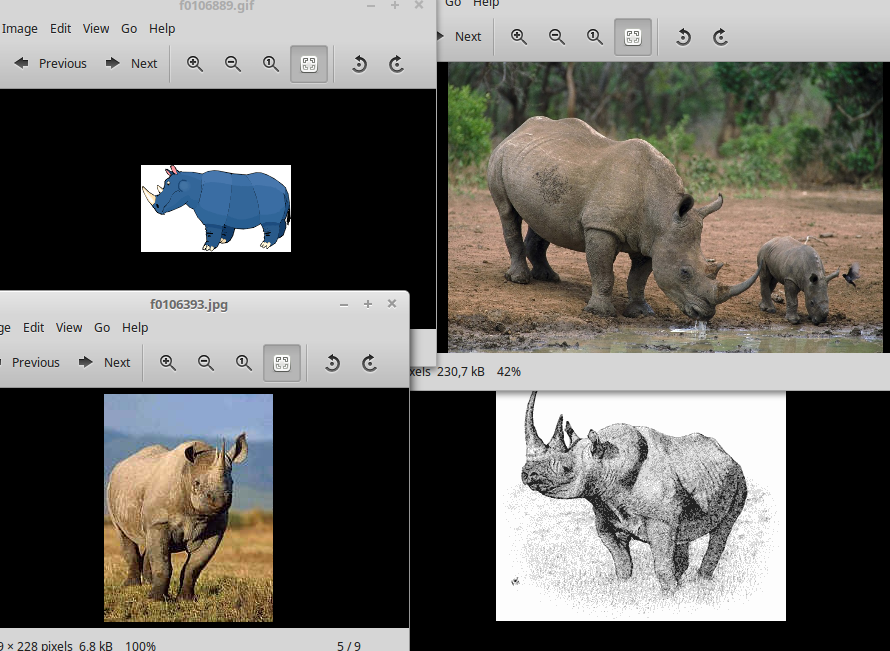 Ok, so the next logical step is to take a look at the other recovered files, staring by the .doc file, which title is

This seems to be some sort of personal diary. I skim over them, I’m looking for a lead. And I find it in the las two entries:

This piece of evidence shows that the suspect freaked out and got rid of the hard drive of the computer. This makes sense as the computer was found without a hard drive. Also, this leads point to the existence of more hidden pictures in the USB. The accused then formatted the USB drive, thinking that such action would erase the contents of the memory. The suspect also talks about changing a password of a “gnome account” that Jeremy gave him/her. I should take a look at the network traces and see if I can find activity related to this sentence. But first, let’s take a look at the .txt files.

At first glance, the .txt can be grouped as follows:

I suspect that there must be a lead embedded somehow in this files. But I’m not familiar with the stego technique that may have been used. I can only guess. Also, speaking about stego… Is it possible that the alligator pictures contain rhino images or secret messages embedded in them? It would make sense, but I have no clue of which algorithm could have been used.

Maybe it’s time to look at the network traces and see if I can get any relevant data from them. The suspect had to use some script or program to hide the images and maybe I can find the download among the trace.

I first check the integrity of the files rhino.log, rhino2.log and rhino3.log. Once I’ve done this, I proceed to open the first file with Wireshark.

It looks like the IP address used by the suspect’s machine is 137.30.122.253. This first trace contains 6557 captured packets. I decide to filter by the TELNET protocol. The TELNET communication happens between the suspect machine and a machine with IP address 137.30.120.40. There seems to be two TELNET sessions in this trace.

The session starts by exchanging some parameters and the remote maching asking for a username and a password. The suspect enters the following credentials.

After the login, the user gnome starts executing some commands on the shell: ls, du, df… and then, passwd. He wants to change his password. The first try was gnome1234 but the terminal prompted “passwd: Old and new passwords must differ by at least 3 positions.”, so he tried gnome12345. The program then exits with the message “Permission denied”.

Then the user tried to logout twice with the non-existing command “logout”, after which he wrote “exit” and successfully logged out from the remote machine.

The session starts by exchanging some parameters and the remote machine asking for a username and a password. The user tries to login with the username “golden” but fails. The user then logs in with the same credentials as the first session and then executes:

It looks like someone is leaving a message for John. After saving the file, Georgia executes ls -l and something catches my attention. I did not mention it, but during the first session, when the user gnome executed ls -l there was only three files and now there are 7. This is a screenshot of the first session:

And here’s a screenshot of the second one:

Here are some suspicious files: rhino1.jpg, rhino3.jpg and contraband.zip. Someone must have uploaded them between the first and the second session.

After that last command the user tries to logout with the non-existing command “logout” (again), after which she wrote “exit” and successfully logged out from the remote machine.

Someone uploaded the files to the remote machine… If this has been done using the same machine that the suspect uses, there are several protocols that he could have used. But something tells me it’s gonna be FTP.

My hypothesis was right. Just after the first TELNET session, a FTP session is started and the user gnome uploads the file rhino1.jpg

The file rhino3.jpg is uploaded right after.

The file contraband.zip on the other hand, is uploaded right before the second TELNET session.

I should be able to retrieve the files from the network packets, I’ll begin with rhino1.jpg.

First we have to find the packet with the beginning of the file. I find right after the STOR request has been accepted. 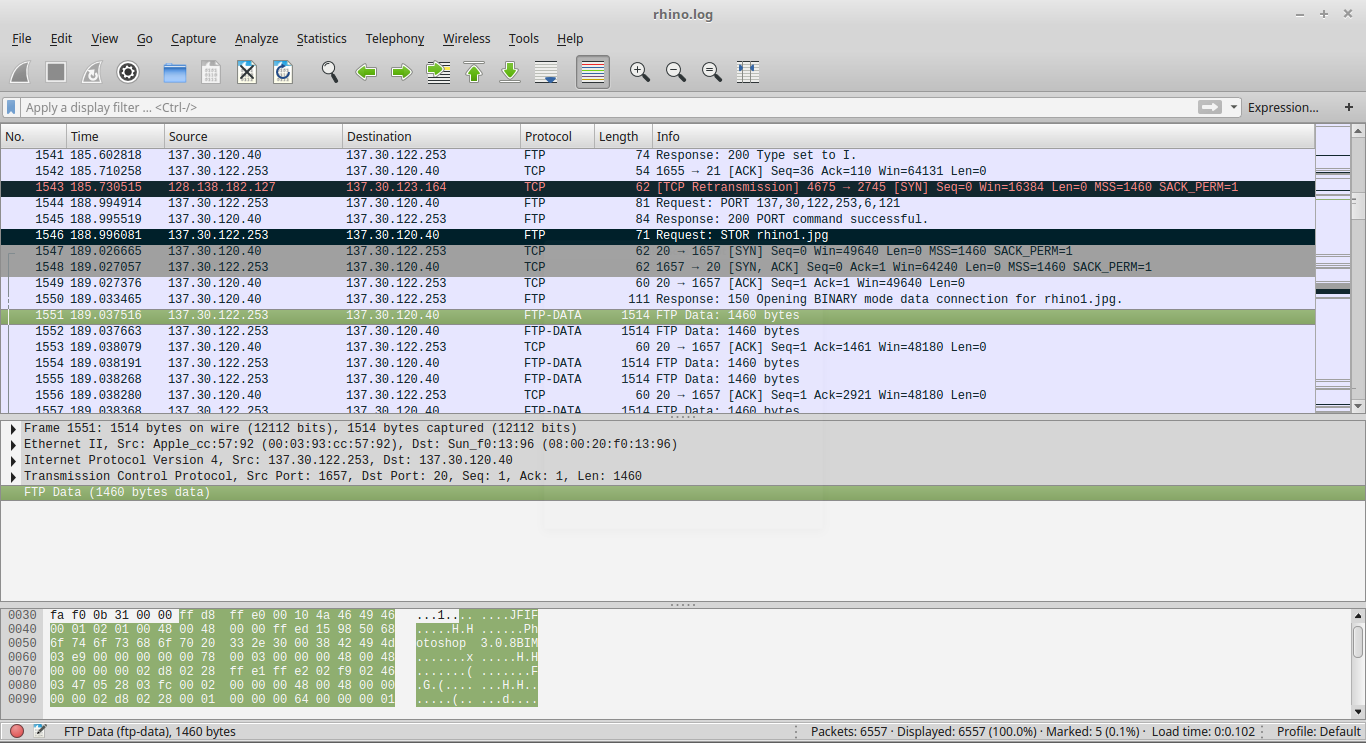 The file signature of a JPEG file is composed of two bytes: FF D8 as can be seen in the screenshot. In order to extract the whole file, I only have to right-click the packet and select Follow->TCP Stream. The We just save the data as RAW with the name “rhino1.jpg” 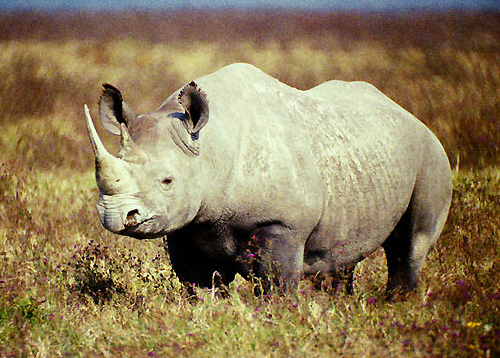 Looks like I found the fifth rhino! I repeat the process with the file rhino3.jpg and obtain the following image: 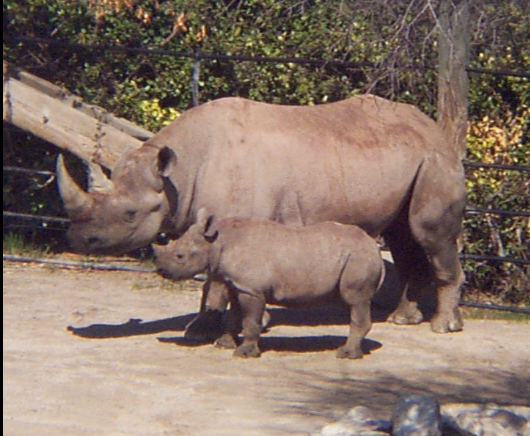 Now I can recover the file contraband.zip, following the same steps. But after I do it, I find that it has been encrypted. There’s only one file in it, called rhino2.jpg. What could the password be?

This trace contains HTTP traffic. I take a look at the HTTP objects and see that two more rhino images have been transfered. The images have been downloaded to a machine with IP 137.30.123.234 from a machine with IP 137.30.120.37 and hostname www.cs.uno.edu. The route of the images at the remote machine is: /~gnome. The names of the pictures are rhino4.jpg and rhino5.gif.

Let’s list all the loose ends that we still have: